The term aquaponics stands for a combination of aquaculture and hydroponics. It is typically for aquaponics,
that the combined cultures complement each other. Together they form a cycle economy.
Fish cultivation is the nutrient producer, while the plants live on the waste products from the fish culture. 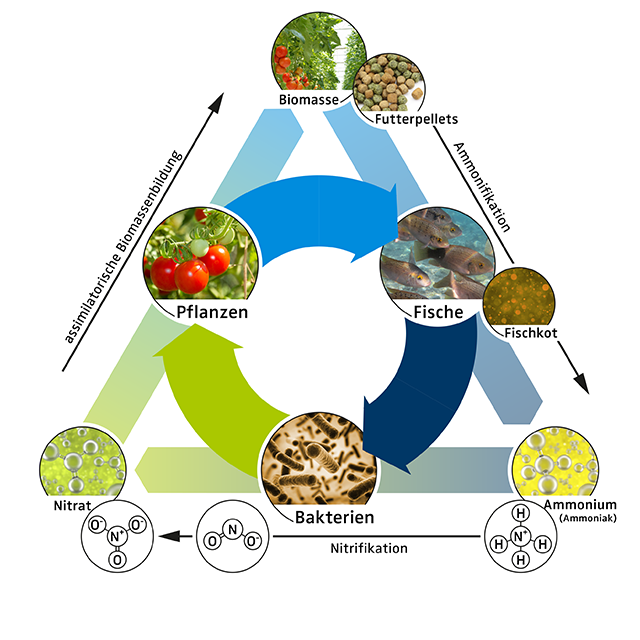 This is the same mechanism, that can also be observed in inland waters and is described as the “nitrogen cycle”. Contrary to conventional agriculture, which always uses only a small part of this nutrient cycle, the complete biocircle is represented within aquaponics. Compared to nature, this corresponds to a complete ecosystem, such as a lake.

Aquaponics and the variety of nutrient cycles

Up to now, classical agriculture only uses sections of the entire nutrient cycle. It is mainly based on feeding fertilizer (and other substances) to the plants. In contrast, an essential quality of aquaponics is that it maps the entire nutrient cycle. In doing so, aquaponics understands the also surrounding processes and the exchange of technical or biological substances as part of the cycle. Therefore, the components of an aquaponic plant are not restricted to modules, that allow these basic procedures. Aquaponics can be complemented by a multitude of related processes and seamlessly integrated into other sustainable technologies.

For example, aquaponics can make great use of biogas plants. In addition it can produce other by-products such as worm cultures or humus production. It can even be in symbiosis with them, for example, when insect production is used to produce the fish fodder.
Aquaponics is an open concept and can be very diverse. For example, aquaponics can be realized as fresh water or seawater aquaponics. In addition to fish, it can also be operated with invertebrates (shrimp / mussels) together with algae.